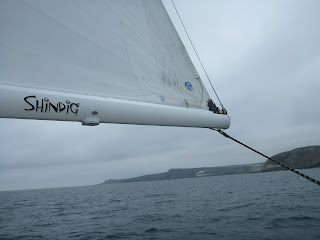 With San Miguel in the rear view mirror we set off for Santa Cruz Island.  It was a gentle broad reach past Santa Rosa Island in 8 to 10 knots of wind. 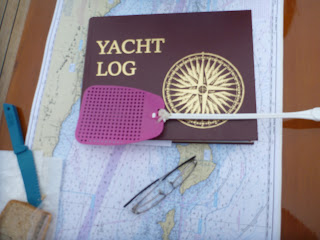 A few kelp flys hitched a ride but were...... uninvited

In the channel between San Miguel and Santa Cruz we were visited by many dolphin.  This was the first time that we really had seen large numbers of dolphin on our trip south.  They alter course when they notice you and make a dash to Shindig's bow and ride the wave.  We were only doing about 4.5 to 5 knots and they seem to get bored at this pedestrian pace.  After a few minutes they'd disappear and then another group would show up for some fun.  You can hear them squeak ...... 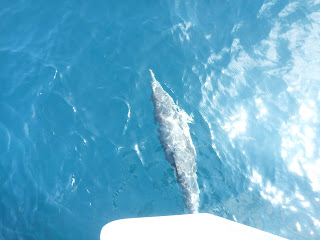 Santa Cruz Island is 20 miles long and 2-6 miles miles wide; it is  a favorite destination for boaters in the area.  There are no services or amenities and only wild coastline and small anchorages tucked along the rocky points.

Now that we are around Point Conception (the Horn of the West) our navigation is more East than South along the island chain.  We are closer to San Diego than San Francisco now.  We've turned the corner.

After having a rolly night before, we were looking for a protected anchorage and decided on Pelican Harbor.  We were the only boat for the 1st half of the day and enjoyed the small cliff lined cove. 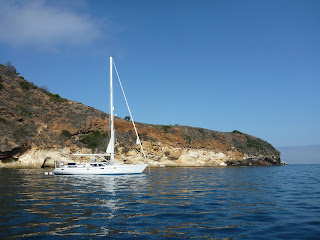 A short dinghy ride away is Prisoners Harbor.  We went ashore and hiked for a few miles. 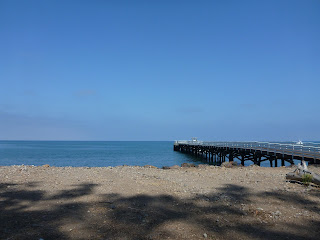 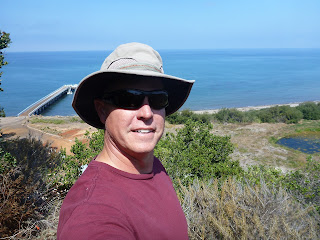 With two days at Pelican Harbor, we had time to service the water maker and get it working.
We can now make 15 gallons of fresh water per hour from sea water.   Initial water quality tests look good!

Posted by shindigsailing at 9:19 AM