We spent a delightful day on the most northern chain of the Channel Islands, San Miguel Island Monday. 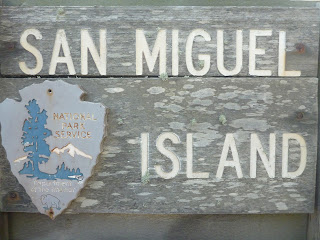 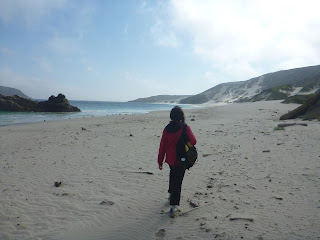 With an advance park pass, we dinghied to shore, and hiked a mile up the cliffs to a ranger station.  George, the on island volunteer ranger, was waiting for us.  In fact he had been waiting for 3 days, after getting communications from the US National park service about our arrival window.  The on island hikes are limited to those led by a ranger.  We decided to take the 7 mile round trip hike out to the cliffs where we could watch elephant seals cavort in the water and on the beach.

An spry gentlemen in his 70's, George set off at a brisk pace, talking about his previous careers as a high school teacher, park ranger on the Island of Hawaii, in the Sierras and now on San Miguel island.  He also is a long time sailor and had lots of questions and comments about our plans and his appreciation for the Pacific coast and Mexico.

On the way to the beach, George took us on a side hike to overlook the West end of the island.  It was a beautiful spot and if it weren't for the chilly 10 knots wind you might be convinced you were in Hawai'i.  The blue turquoise water and rough rock approaches were amazing. 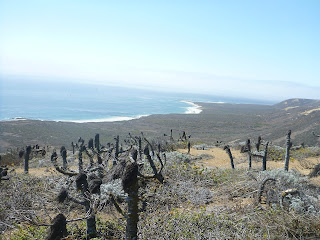 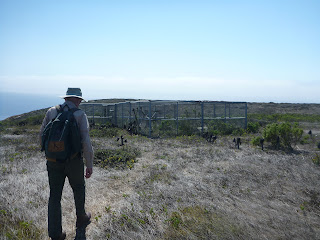 In route to the lookout we came across 10 or so large fenced pens.  These abandoned cages were overgrown with shrubs and tall grass and left over from an ambitious project to bring back the native island fox.  They looked like something out of the TV show "Lost".

The fox population was down from 400 or so to 15 in 1999 .  Apparently these cat sized fox were being wiped out by the Golden Eagle.
A generous grant allowed researchers to relocate the eagle and breed the remaining fox in captivity on San Miguel Island.   The project appears to be a success as the fox population is over 300 and monitoring continues to validate a healthy comeback.  The fox shares the Island with its primary food source, the deer mouse.  The island makes an interesting laboratory with only two animals on it.  Three if you include George.

Once at the cliffs, we rested at the overlook, eating our lunches, and commenting on over 60 elephant seals that were playing in the water and hanging on the sand.  They are on the island for about a month, to molt.  George had hiked out the day before to scope out the destination.  He noted that once Huell Howser , the TV lead for California Gold series, and his entourage had arrived on the island to go to the same spot, but no one had checked to see if the pinnepeds were there in advance.  And they were not. 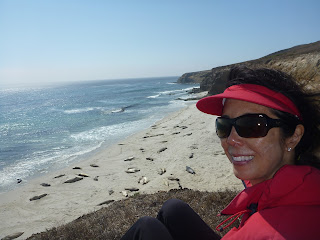 Elephant seals are a surly bunch.  They bark and snort and regularly pounce on others that are sleeping on the beach.  After watching for some time you could see which seals were the aggressive trouble makers.  Seals ready to engage would rear up, posture and lunge at their opponents.
(Rob's Side note.  Replace Elephant seal with Politician in the previous paragraph.  Something appropriate for an election year) 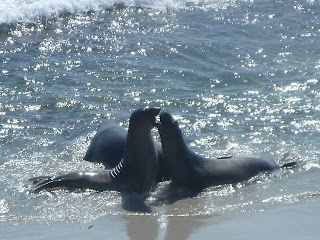 It was time to head back, and once at the ranger station, George grabbed a shovel so he hike some more with us down the trail, doing some trail maintenance on the way back up.  The relief ranger would fly in the next day, Tuesday, and he would go back to the mainland for a week.  He said it can be isolating on the island, but his admiration for the full time ranger and the natural progress of the Island is what has kept him there for years, and will likely be his final post with the parks.  He also admired the ravens, which circled overhead.  We took turns making raven calls.  He hoped we could stop at the Ventura Yacht harbor so we could enjoy the club's last season's race, but our timing won't match up.  So we bid goodbye and Thank You, and headed down the remaining hill.  We looked back to see the overlook where George checks each day to count the number of boats in the harbor.  Today, only one boat named Shindig.

Posted by shindigsailing at 8:25 PM