Bahia Concepcion is filled with little islands and beaches.  Each beach has its own personality; simple structures to provide shade for RVers, more permanent palapas that touch the waters edge and custom homes for vacationers. Things are still very remote, there is no easy Internet, cell service or laundry. Forget about public restrooms, taxis or pizza.  We are happy with the simple things, especially having a place to take the trash (basura).  We used Gary's tip jar with the recommended 10 pesos for the garbage man, which apparently makes him very happy.  If you're lucky, there may be one restaurant or small tienda (store) to support each beach.  Mexico's Highway 1 provides some audio color with the background noise as the big rigs grind their way up the precarious highway, towards Mulege, the nearest town, 13 miles away.
We made friends with some landlubbers, and spent time with our friends from Tisha Baby, Sirena, and Viva. Afternoons and evenings were spent ashore at the local restaurant, Bertha's, or a picnic lunch on a deserted beach in the 85 degree water. A highlight of our stay was a generous farewell Sunday brunch hosted by Jerry, at his hillside custom home, We arrived via dinghy convoy and hiked up the rocky steps to his place.  Jerry made ramus fizzes and bloody marys and we shared fruit muffins, egg fritattas and comraderie on the balcony enjoying the breathtaking views.  There was more music as Jerry played some fun songs on his vintage piano. (The video above is of Jerry - hope it works) It was a memorable visit for all of us.

Posted by shindigsailing at 7:17 AM No comments:

We appreciate the unexpected and continue to have more adventures as we near the turn around point for our trip. Following up on a chance introductions at a local taco restaurant in Loreto last week, we walked two beach fronts looking for Tap and Anita. Many of the beachfront casas (some as simple as a lean-to, others modeling South Pacific palapas including overhangs for RVs) are now boarded up. It is the end of season, and only the hardy, year round gringos stay. Tap started a school here 40 years ago based on sailing and Outward Bound. While in his late 80's, Tap manages a quick smile, especially when the discussion turns to Mexico, shiny watches, pretty nurses and music. He plays the violin, viola, and harmonica. His wife, Anita, invited us into their home to check out the red piano. Their home, like others around it, is "off the grid". There is no electricity, telephone nor Internet. They live here most of the season and then go back to the States for the hot months. Nancy rummaged thru the piano bench, and found some American Folk Songs, with classics like When Johnny Comes Marching Home Again, and Clementine. We all enjoyed as much music as she could play and sing, with Tap humming and playing his harmonicas. That resulted in an invite for dinner the next day.

Last night we moved our sailboat over to their bay, and anchored right in front of their home. Anita had invited several other friends, including Jerry, who made extra money in college by playing piano long hours into the night in local Nevada bars, restaurants and brothels. We re-introduced ourselves to Tap, and settled in for a lively night,filled with more impromptu music, by both Nancy and Jerry (this time Nancy brought her music), a delicious dinner on the bbq, and wine.

Nancy wore another shiny watch which Tap appreciated, and we all chuckled at their stories of living on the beach and the colorful gringo and local community of Mulege, which includes these unique, beautiful playas.
Anita explained that she bought the piano 8 years ago to bring music into their home, especially for Tap's enjoyment. What a wonderful reason to bring friends together. From the stories they tell, as well as our delightful dinner get together last night, her strategy worked well. Tap turns 90 next year, and we are invited to his celebration.
Posted by shindigsailing at 8:06 AM No comments:

Written from the anchorage at Santispac, in the Bahia Concepcion, about 200 nautical miles north of La Paz. After visiting numerous anchorages, each one as pretty or interesting as the next, one would think there would be no more "firsts" on this part of our adventure. Today there were several, notable enough to note, maybe not to blog about. But heck, this is another way to get up to speed on the blog, and keep moving (I mean, sailing) forward.
Here are the firsts:

2) Encountered heavy fog, with visibility down to ¼ mile. That is not fun. Rob was down below doing his communications things, so I called him up. We used the Boat Horn, which is loud, but needed, to alert some pangas that we could see on radar but never saw with our eyes. I asked Rob to let me know each time before he pressed the button - if you haven't heard one of those horns, repeatedly, they give you a mental shock when they go off.

3) Caught our first dorado - beautiful shape and color, but not large enough to keep. Besides, I had a special dish in mind when we anchored down…

4) Despite the online charts, our trusty "A cruiser's guide to the Sea of Cortez", we found the depths in Concepcion Bay were Way Off! Instead of an expected 50-60 feet, we got down to 12-15 quickly, had to do a sudden tack, and went 180 degrees in the other direction to find deep water. We're glad to be here, but the general approach, multiple big rocks and islands to dodge, and lack of accurate charts, made the final arrival and anchor down even more sweet.

5) I shared a dark beer with Rob as our "anchor down" beverage, 9 hours after we left this morning. The wine supply is dwindling and I've saving it for more shindigs this month as we finish up our cruising in this season.

The anchorage at this beach has only two other boats, and a very spartan beach with a few buildings. We had been advised to look for the "green restaurant", which is always exciting after cooking on board night after night. I thought we had identified the restaurant through the binoculars, only to find as we approached, that structure is actually a very nice RV camper and compound. Guess we'll continue with our original plan for dinner tonight, another first. "Curried Coconut Shrimp on Rice Stick Noodles".
Posted by shindigsailing at 4:58 PM No comments:

Happy to be June!

The month of May seemed to go on forever – contrary to the rest of the cruising months which used to fly by.  Why?  Maybe all the changes in locations from the mainland to Baja peninsula, celebrations, the trip home,  more goodbyes, reunions and making new friends, other family and friends health challenges, college semesters ending, summer plans being made, and Shindig wanting to be both snug at the La Paz marinas, as well as exploring the Sea of Cortez.  But it is June.  I am excited to have one more month on water, before the summer starts back in the States.

Today, we are about 150 miles north of La Paz, across from the town of Loreto in an anchorage called Isla Coronado.  We left La Paz 15 days ago.  Long passages are not required here, as the new destination may be 4 or 20 nautical miles away (easy day trips).  We’ve done more sailing here than we had on the mainland.  Rob has kept the spinnaker on deck and we’ve enjoyed many downwind jaunts as we head north further into the Sea.  We had winds gusting to 30 knots a few days ago and had to reef the main completely.  But usually we've enjoyed 10 to 12 knots of Southerly wind.


Our activities for today include hiking to the top of the volcano,  saying goodbye to our friends on Fluenta  having games afternoon aboard Oogachaka, and perhaps a shared dinner potluck.  We will likely head north tomorrow for two more stops to reach the Bahia Concepcion –which we heard is a “don’t miss”.  One more week of exploring and then one week of leisurely heading south as we return to La Paz, our summer home for Shindig.

Most of our anchorages, and even the one "big" town, Loreto & nearby Puerto Escondido, do not offer Internet.  (Nor stores, restaurants, people)   We use the HAM radio winlink communications (see previous blog) for emergency and family updates.  When we do get a “fix” on the Internet, it’s almost comical how we spend a couple of days trying to get online.  I’ve been known to walk a mile in the very hot Mexican  with my laptop down a deserted, paved road to an RV Park and store that charged 10 pesos (less than a dollar) for super-fast Internet.   Their apple fritters were also spectacular.  Rob joined me for the walk the next morning. 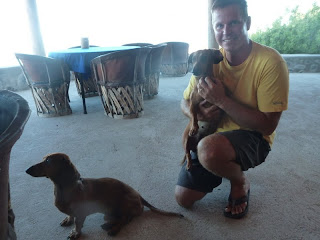 Each anchorage is unique, and breathtaking,  and completely silent, except for the wildlife. This morning we had dolphins surfacing among the sailboats, a large school of rays swimming in formation, and pelicans diving for their breakfast.  We try to get exercise each day, either going ashore via dinghy for a hike, exploring the waters with our paddleboards, and snorkeling and swimming.  There can be sudden, unpredictable winds at night,  but mostly we've enjoyed evenings in deep sleeps, and wake up rested. No booming club music from the Cabo dance floors to keep us up.


Posted by shindigsailing at 7:52 AM No comments: