The sail from Santa Cruz to Monterey was a mild 7 to 8 knots of wind on the beam.  Shindig pushed along at 4 to 5 knots for most of the 20 miles and kicked it up a notch as the sun made an appearance and the wind picked up.

Once in the marina Nancy and I got to work trying to free up a blocked thru-hull.  An intake strainer was plugged up with jellyfish and we couldn't clear it with a wire poker.....  Eventually we used the dingy foot pump to blow air down through the strainer and we were successful at displacing jelly guts.

We spent a couple of days here, eating seafood, going to spas (Nancy), taking a long 3 hour walk past the Aquarium and Lovers Point into Pacific Grove and back.  Nancy stocked up on more fresh produce at the Wed. farmers market and we traded stories and weather forecasts with new Baja Ha-Ha sailor/friends.

One interesting thing about Monterey harbor is the loud snapping noises made by the sea creatures trying to get into your boat.  It sounds like they are eating off the new bottom paint. 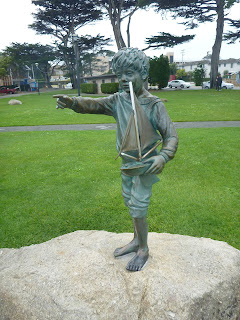 This video is of a female otter that was hanging out in the marina slips.  Her nose is all messed up.  It turns out that otter mating season is rough on the females.  This otter had a tag on one flipper and may have enjoy the good life at the Monterey Bay Aquarium.   At one point the otter was banging a shell on the hull of our neighbors boat.  Nobody was aboard but I bet that would get your attention if you were below.

Posted by shindigsailing at 7:47 AM