I installed a nice flat panel TV on the boat and was bummed to find that there was a terrible/obnoxious hum in the audio when powered on the Xantrex inverter.   I tracked this down to the modified sine wave inverter.  This didn't say much for the input filtering on the TV but I wasn't about to un-install the thing.  After all, I had just drilled 4 holes in the boat to mount it.

I figured it wouldn't be a bad idea to have a pure sine wave inverter onboard for the AV stuff and for computers.    I added a 400 watt unit and it solved the TV hum problem.  While I was at it I wired in a power strip that can be used by other "sensitive" electronics.

Posted by shindigsailing at 9:24 AM No comments:

Having fun with the GoPro camera this weekend.  Here is a time lapse of my trip across the bay to Alameda.  The boat is at Hansen's Rigging getting a makeover.
Posted by shindigsailing at 8:22 AM No comments: 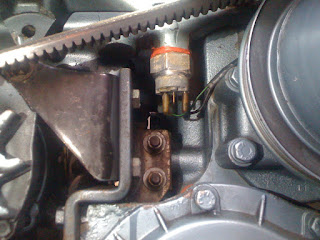 Sealed this up after many hours of tracking down an electrical problem that was caused by corroded leads on fresh water high temp switch.
Alarm was sounding on the open circuit created by the corrosion.  Fixed the coolant leak (cause of the problem) at the same time.
Posted by shindigsailing at 8:02 PM No comments: