We flew back to La Paz the night before Thanksgiving.
While Thanksgiving is an American holiday, most of the cruisers, including Canadians, like to celebrate this day.  Many of the local friends, including marina staff, are also included in festivities.  The day began early with Nancy helping group of volunteers set up tables, chairs, linens for over 200 cruisers at our marina.  Rob had volunteered to be a turkey carver, but was assigned to the Turkey table, to help provide servings of white and dark meat.  We had a grand time.  and got to say Hellos to several couples that had just returned to town.  As the sun set, there were several post parties, which ultimately ended up at yours truly, Shindig.  We had an impromptu music night with guitars, a mandolin, fiddle, autoharp, and vocalists.  It was a Thanksgiving in Mexico to remember!

A Wedding & Family Fun at the Beach 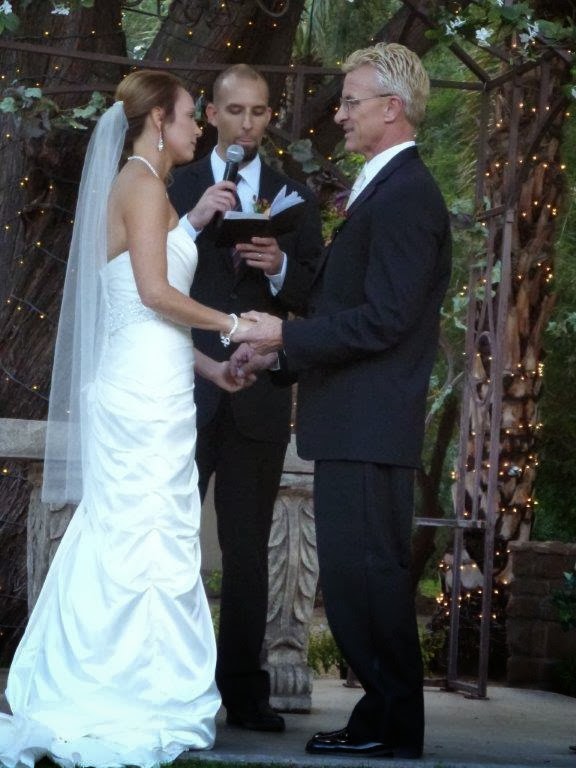 Tana and Clint's wedding was beautiful. We are so happy for them. Some friends from the SF Area also attended so we got more hugs and laughs in together.


The beautiful bride and her father
Family get togethers are always fun. In addition to Rob's parents, his brother Dave and kids, Ali and Nicky, joined us on the Silver Strand in their RV. And very spur of the moment, Nancy's brother and wife, David and Kathy, dropped by after landing at the San Diego Airport on to way to another family Thanksgiving.
We shared a long walk on the flat sand beach in Coronado, catching up on all the positive things that have happened since our last visit together in Park City

Of course we also got our errands to West Marine, Beverages and More, Trader Joes and Target, too. The US GNP rose slightly.

What a great reason to fly back to the States!  Our girlfriend Tana is getting married! We heard of the engagement in the summer, and made plans to be back to celebrate with them.  Our travel plans became a little more complex so we could make the most of the short visit back.  We decided to fly in and out of La Paz, sneak in a fun visit with Kaaren and Jim (Kaaren is Nancy's girlfriend from her first job at IBM in Santa Barbara) and extra bonus, see Rob's parents again for two nights in nearby San Diego.
Our trip North included a ride to the La Paz Airport, flying to Tijuana, taking a shuttle to the border, walking through customs, taking a larger shuttle from the border to the San Diego airport. After a brief layover, we hopped Southwest to the Phoenix airport, where Jim and Kaaren were waiting for us in the terminal.  They had flown in about 30 minutes prior.  Off we went to their new home.
Despite a little rainy weather, we enjoyed the beautiful surroundings, morning rides in the arena, admiring Jim and Kaaren's team roping practice, shopping trips, shooting practice at the range, a matinee movie, art walks, football games and lots of laughs and stories over delicious meals and wine. What a great visit.

Posted by shindigsailing at 7:37 AM 2 comments:

Nancy wants to get one of the bumper stickers that says Vive La Paz to remember the fun we've been having here.  We just found out that they are not available.  Several years ago the Mexican government gave them out as a promotion.  But Nancy is still looking...

Now we know why some cruisers call La Paz their home.  It would be easy to just stay here.  The town has resources, some infrastructure, a great gringo and sailing community, and warm, friendly locals who want to help.  And being just a few miles from the gateway to the Sea of Cortez makes island hopping a reality.

We probably spent more time in the city and the marina than we had planned.  Now Shindig is ready to continue her adventures in Mexico for the rest of the season.  Making new friends, and reconnecting with friends from last year, has made our return more enjoyable. 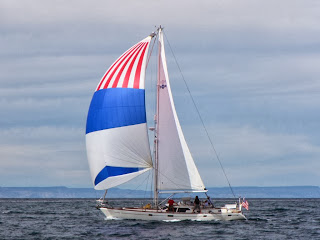 Shindig went racing in the Veteran's Day Race on Sunday, part of the "Veleros de Baja".  It was a great excuse to get our floating house out of the slip and onto the water.  To get ready, we folded up the new solar panel assembly, stowed the bimini (cover), and de-cluttered the deck.   Once the cooler with ice and drinks, we were ready to go.   Three joined us, Rigo from Heavy Metal, and Greg from Compadres, and his girlfriend, Monica.  She had never been on a sailboat, and enjoyed her first race.

There were 8 boats that crossed the start line.  The wind died in the starting area and there was a little chaos.  Collisions were avoided and and then the 8.4 mile race was on. The 12-15 knots of wind was perfect to let Shindig stretch her legs to windward and show her red, white and blue spinnaker downwind   We placed second in the race. 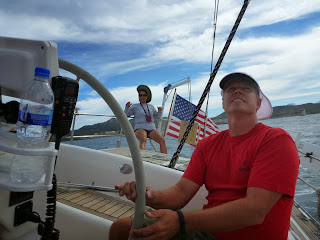 Posted by shindigsailing at 7:32 AM 2 comments:

Last year this time, we were sailing down the Pacific Mexican coast, heading from San Diego on the 750 mile trek to Cabo San Lucas.  Halloween night was a blur, except there were a few decorations on Shindig, candy and caffeine to fuel night shifts.  This Halloween time was a great contrast, being in the town of La Paz, and enjoying Halloween, plus the Day of the Dead celebrations.  Festivities in La Paz started on Halloween night, with families strolling the Malecon in costume, candy and trick or treating. Mexicans celebrate Dia de Los Muertos November 1 and 2nd.  We asked for a special night shuttle from the marina to drive us up to the Teatro de Cuidad, where we'd heard there would be decorated booths, and a contest of Catrinas.  According to Mexican folklore, the Catrina represents the Death in Mexico, and girls and women dress up in elaborate costumes.
Outside, we strolled through many decorated alters ,with colorful flags, sugar skulls, yellow marigolds, pictures of favorite saints, and beloved lost ones.  Coincidentally, the Escuela de Musica was having their final youth orchestra concert inside the Teatro de Cuidad. We got passes into the big theatre and sat in the upper seating area, listening to several of the orchestra's pieces.  It was fun to see many of Nancy's new music friends on stage, as well as be a part of the audience, mainly young children, who were going to a concert for the first time. Lots of show tunes and other contemporary music was shared.  When we went outside, the night festivities were ramping up.  There were groups of costumed kids performing western dancing up on the stage.  The crowds were forming as young girls and women, dressed as Catrina, walked slowly among us, posing for pictures.  Even the youngest ones were eerily solemn, aided by their elaborate facial makeup.
The next days festivities were similar.  During the late afternoon, we drove by a local cemetery, and the streets were crowded with double parked cars with people darted in and out of traffic.  They were gathering there to honor their loved ones.  It was a very festive occasion, a true Celebration of Life. 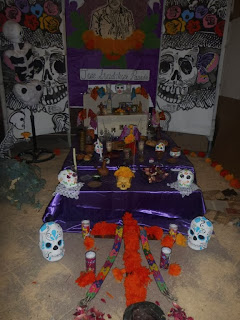 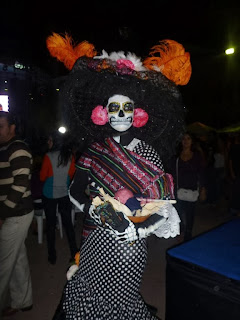 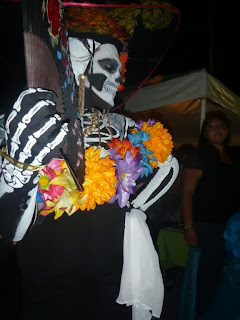 La Paz and the nearby islands provided such a fantastic backdrop for our visit with Elaine and JD last week. They were here for 10 days, most of which was spent up in the Sea of Cortez islands aboard the mighty Shindig. As each day seemed to create another new experience, Elaine dreamed up a fluid Bucket  List to capture their visit highlights.

Swim with Whale Sharks: (Gracias to our neighbor Greg for taking us out on his panga one morning to find two whale sharks, baby and later, momma, swimming peacefully about 3 miles from the marina). Momma was about 25 ft long, with beautiful spots and big mouth! We were careful not to splash when we entered the water, and swam around her for a long time.  Elaine accidentally touched her tail, and apologized profusely. 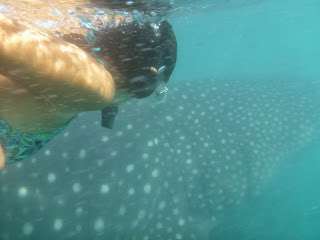 Have a Cultural Town Experience: La Escuela de Musica had a series of concerts this week.  We went to the first one, which featured a fabulous jazz trio, with trumpet and violin soloists.  The composer was Claude Bollin, a French contemporary jazz composer. The event was sold out, and the mostly Mexican audience very enthusiastic.  Later, Elaine and JD enjoyed a day of sightseeing around La Paz, visiting old Cathedrals, shops and city markets.

Frolic with Sea Lions: About 5 hours north of La Paz is "Isla Isoletes", where curious sea lions, pups and mothers, come out to swim.  We snorkeled here several days and were treated to their playfulness and lots of tropical fish, in warm waters and sea caves. 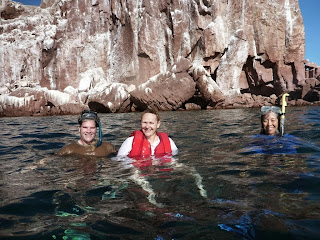 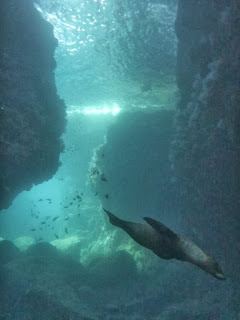 Kayak anchorages in solitude:  With a set of kayaks, stand up paddle boards, snorkels, masks and fins, we spent most of the time in the water.  The visibility was usually 50-70 feet and the water at least 82 degrees.

See a Sea Turtle, Gray Whale, Rays and Dolphins:  Every day Elaine added another animal to her list and Mother Nature kept serving up natural sealife. 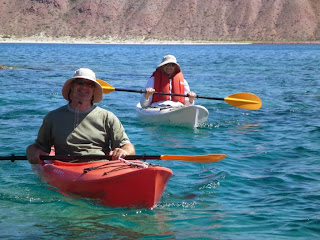 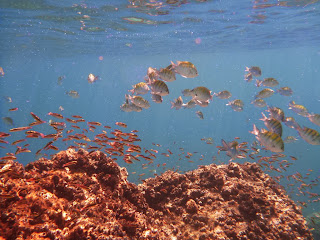 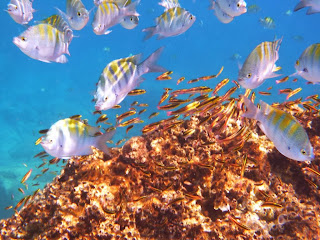 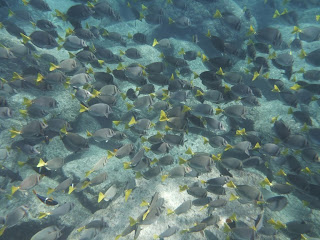 Enjoy the Night Skies: Without reflections from ambient city lights, we enjoyed watching for shooting stars, identifying constellations and an occasional satellite.

See first hand what the heck Nancy and Rob are doing in Mexico: Accomplished!
Our new friends in the cruising community of La Paz welcomed our visitors.  Elaine and JD joined us at coffee get togethers, shared rides in cars (and the back of pick up trucks) and informal group dinners.
The overall support and comraderie of the cruising community continues to be one of the best highlights of this life.  So glad that Elaine and JD could experience it with us.


Posted by shindigsailing at 9:52 AM No comments: