It's all about the Journey - Overnight to Monterey, CA

After several missed weather windows earlier this year, we finally had a clear week for our first overnight voyage down to Monterey Monday.  We left Sausalito at 5pm, and our friends Dan and Betsy waved (and called us on the VHF) from the Marin Headlands as we were tacking up through the Golden Gate Bridge. The winds were NW at 20 knots as we cleared Point Bonita.  At the end of the shipping channel markers we turned south and headed down to Monterey.    15 hours and 90 nautical miles later, we successfully arrived into the beautiful Monterey harbor. 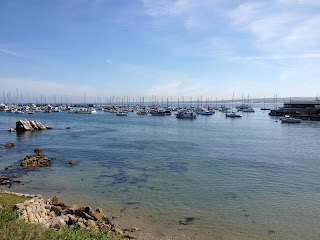 This was my first overnight watch with Rob. We divided the shifts into 3 hour intervals, and dozed mostly in the cockput during our off-shifts.  Wind conditions were mostly 11-16 knots, allowing us sail most of the way, motoring the final 2-3 hours as the winds diminished once inside the Monterey Bay.   At times the night sky was clear, with lots of stars to admire.  We used the chartplotter a lot, toggling between two main displays, the Charts and Radar, to check for traffic.  With mid-week, there were only a few fishing boats at night.  Despite my 'mind over matter' strategy, sleep deprivation was tougher than I expected, even at the start of my 11 - 2am shift.  Rob was a great captain, and ready to jump up to help or advise during the whole time.  We tried out some new 'stay-warm' approaches learned from the Boat Show last weekend, as well as hot beverages and snacks to keep us alert.

With this first voyage complete, we've learned a lot, and have a list (some already started) of things to do to make the next overnights, with or without crew,  even better.

Now we've been reacquainting ourselves with Monterey's attractions - fresh seafood, picturesque waterfronts, friendly locals.  This morning we toured the Aquarium which continues to update their exhibits to be fresh and appealing for all ages. There is a new Jellies Adventure exhibit that has  psychedelic themes from the '60s that was fun.  Rob even found a penguin that was tagged "Rob N".  He was the excited one pushing against the tank, trying to escape. 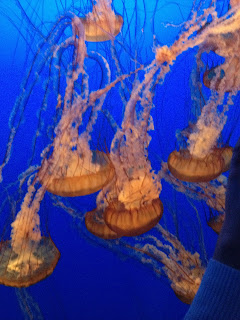 Tomorrow we'll be in Santa Cruz, then Half Moon Bay, and back in our slip by Sunday night.
Posted by shindigsailing at 6:47 PM No comments:

Equipment you never want to use 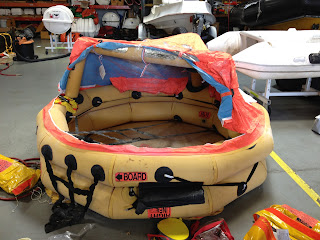 We are servicing our life raft and hope to never pop it in need.....
Here it is inflated at Sal's in Alameda.  It passed the overnight pressure test and will need all new safety gear from Winslow.  The pressure bottle will be hydro-tested and the valve replaced.  The service cost about 1/3 the price of a new raft.  Ouch!
Posted by shindigsailing at 9:49 AM No comments: 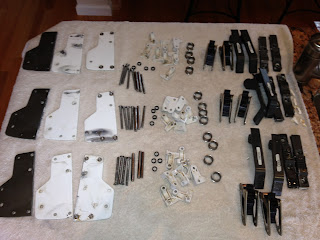 Having fun rebuilding the Spinlock clutches.....  A few of them had lost spring tension and the only way to fix the spring is to take the entire clutch apart.  The most difficult part is getting them off the mast.  The stainless screws were really frozen up good and when I finally got them off the mast they took some paint with them.  I'm priming and applying some touch-up paint before they go back on.  The photo shows 3 of the 6 clutches that have been reworked.﻿

Posted by shindigsailing at 1:23 PM No comments: