We've been gone one week, and it feels like a month! Going out the Golden Gate bridge with our friends escorting us, sailing in high winds off Point Sur(all predicted, Mom's), and escaping from the fire were some of the top adrenalin producers. Keeping in touch with friends and making new ones along the way are continued highlights.
I have been balancing between the old tendencies of stocking up on supplies and going to the bare minimum of what we need. My favorite stores at home have been Trader Joes, Costco, WholeFoods, Target, and a local produce store. Friends have been offering up rides to these while we were in Morro Bay, but it really wasn't convenient. I'm learning that it's ok to buy the same ingredient at the local market, even those TJ's has the one I'm used to. New mantra "No Hoarding", and "Small is the new large" Yes, a little quirky! 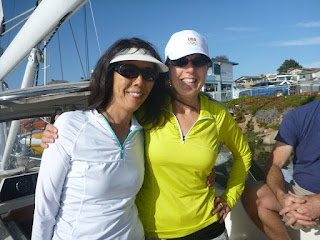 We were so happy to see our Santa Cruz friends, Kate and Tony, again, in Morro Bay. They were on their way back from a visit with their mother, and we were able to plan an afternoon visit and introduce them to Taco Temple. Kate interpreted my subtle smoke signals for supplies and made a special stop at Costco and Trader Joes for me. We all were laughing as we unloaded bags of TP, paper towels, special snacks and treats and a People magazine to "tied us over" for a few days. Then we introduced them to the local Taco Temple, where one taco is really a giant plate of tortillas, local greens & produce and seared fish on top with salsas. We saved room to split a dessert, as there is a special pastry chef. A great way to end our first week south, and get ready to head out to the Channel Islands.
Posted by shindigsailing at 7:12 AM