About Us and the Plan 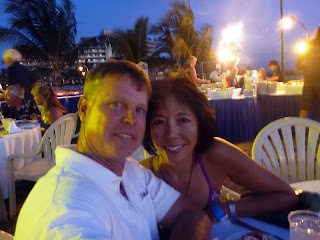 About Rob (rshindigsailing (at) gmail.com)

Rob is an avid life-long sailor who began sailing with his family in the 70’s.  Sailing has always been a passion and he loves cruising and racing.  The cruising bug was planted early as Rob’s parents were part time cruisers for 12 years.  (1990 - 2002)

Rob is a California native and grew up in San Francisco Bay area.  He earned his electrical engineering degree in San Diego, which included a semester sabbatical from college when he crewed on a sailboat around Mexico.   After returning to Silicon Valley, Rob enjoyed a 20+ year career in high tech with hardware and software companies with an emphasis in data storage and hardware virtualization technologies.
A self-proclaimed “geek” , Rob loves to tinker with technology, RC aircraft and microcontrollers that do interesting things.   In the last year he has continued the restoration of a 1919 Model T depot hack that Nancy’s father started in the 80’s.

About Nancy (nnovak (at) live.com)

Nancy landed in California many years ago as a 17 year old freshman from the mid-west and New England.  She finished a degree in engineering from UC Santa Barbara and started a long career of software and hardware sales.  Nancy loves to travel and has enjoyed her adventures all over the world through her work and personal interests.  She is the first to shop at the local markets and try new foods, enjoying the cultures and people.

Prior to sailing, Nancy was an enthusiastic windsurfer (although she could never jibe), as well as scuba & snorkeler.  Anything to get her closer to the beach and the water.
Outside of sailing, she plays classical piano, and the cello, and is maximizing her music time with friends before our departure.  She is on the hunt for a keyboard that will be a reasonable substitute for her piano when they are on the sailboat full-time.

About Us and our Plan


Rob and Nancy met in an early internet connection thru a combination of windsurfing vacation planning and Rob’s blog describing a windsurfing trip to Costa Rica.  They were married in 1999 and began sailing together on their first sailboat,  a Catalina 36.  After 12 years, and an upgrade to the second boat, Catalina 387, they are now proud owners of their current cruising boat, Shindig.

After launching their son, Bryan, in college on the east coast, Rob and Nancy accelerated their timing for sailing out the Golden Gate.  Rob left his job July, 2011.  After seeing how much fun he was having on the “endless summer”, Nancy left her job that October.

Shindig  sailed south from San  Francisco in September of 2012.   Our plan is to cruise Mexico until we get bored and then do the Pacific Puddle Jump.  After enjoying the South Pacific we will likely sail to Australia and New Zealand.