We shared a very exciting night with our fellow boaters/sailors at the Morro Bay Yacht Club.  After being here for several days, we gotten to know several of the boat owners, and developed an immediate camaraderie in our temporary neighborhood.

Our friends boat caught on fire, and burned!  Shindig was rafted to them.
Fortunately no one was injured, as a group of neighboring boaters helped each other get safely away and let the fire department do what they do best.

The following is a detailed description on what happened.

Last night at 11:30 we were jolted awake by screams right outside the boat.  "Fire, Fire, call 911!"
Nancy and I ran up the companion way to find that the Bertram 50 that we were rafted to was on fire.
The flames were contained inside the boat and smoke was bellowing out.

Bob and Scott, the owner and crew, were moving the boat from San Diego to San Francisco and had been waiting out bad weather.  They had disconnected shore power hours earlier and we all had plans to leave the dock at 5:00 am so they could get underway.

Nancy moved quickly to throw off our lines while I got the engine running.  With the lines untied  the last thing connecting us to the dock was our shore power cord that led from our midships onto the growing flames on the Bertram.

I threw the shorepower cord on the Bertram and backed Shindig away.  By the time we were 100 feet away the superstructure was completely engulfed in flames.  Several other boats were on the dock and they too were moving away from the blaze as several small propane tanks exploded.  Shindig motored to a nearby public dock; we tied up the sailboat and got on our clothes!   We walked down to the yacht club to provide moral support and observe the firemen, coast guard, harbor patrol and others work to contain the rest of the fire and assess the damage.

We were there until about 1AM and then had a few hours of restless sleep before getting up with the sun.
This morning the wives of both boaters had arrived, one driving the early morning from the Bay Area, the other up from San Diego, to support their husbands.  A smaller group of firemen were there to clean up.  Insurance phone calls are underway.

The next day we thanked Bob and Scott for their quick thinking.   While no one remembers all that happened we know that they worked quickly to help loosen our lines to their boat, which enabled us to get away very fast and avoid involving our boat in the fire.  They are retired firemen, and knew how to assess and react fast in the panic situation. 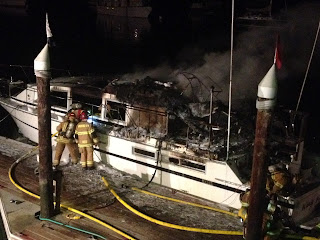 Once the fire was mostly out, three firemen went inside the boat to soak down hot spots. 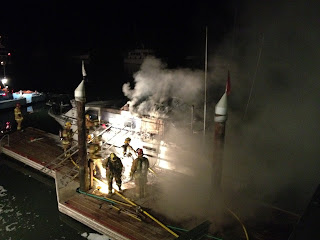 After the firemen got out the boat there was a flare up that needed to be put out.

Everything points to an electrical fire on-board the Bertram and unfortunately it is a complete loss.

Well, that is enough excitement for the week.  We leave in the morning for the Channel Islands.
I don't know if we'll be able to send any updates from San Miguel Island but we should have the tracker working so you can see our progress.
Posted by shindigsailing at 4:25 PM