Our crew is here and the boat is ready.   Yesterday we did a practice sail on the bay with Mom, Dad and Dan and we discovered that Shindig can still sail with all this crap onboard.bay with several regattas and tour boats to dodge.   We did a few jybes downwind and sailed back to Shelter Island

I worked out the watch on schedule and thought that would be interesting to some.
We'll have two people on watch at all times and rotate who is standing watch with who on each of the three legs. We will also have dinner together daily at 5pm so that all 4 of us can chat before going off or on watch duty.

For example, for the first leg of the trip, which is likely three days and three nights, Nancy and my dad, Bert, are watch partners.  After dinner, they are off watch until 9pm.  Then on from 9pm - 1am, and back again at 5am for another four hours.  It sounds tough, but it's much better to have two on and two off, so there's another set of eyes and ears on watch.  We'll let you know how things go as we progress down the coast. 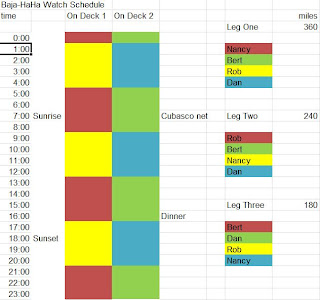 
Posted by shindigsailing at 8:08 PM