Arrrggh.....There be pirates in these waters!


Describing our introduction to Santa Catalina Island as a sharp contrast to the quiet secluded harbors at Santa Cruz Island is an understatement.  We happened to arrive at the beginning of the Annual Buccaneer Days, which meants hundreds of boats mostly from the greater Los Angeles area, with fully costumed crews in pirate costumes, rum drinks and decorations.    Dozens of dinghys zipped in and out of the three coves to convene at the Twin Harbors little town.  Wow!

There is random cannon fire in the cove that is answered with a loud  "AARRGH". 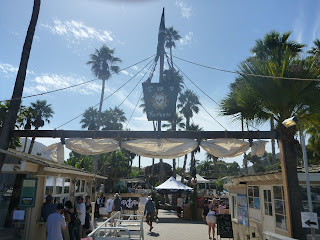 Rob and I had given away our pirate costumes prior to departure.  Then we remembered our flag collection, and found some pirate themed flags to fly on the halyards so we could fit in, a little.

There are hundreds of hiking paths across the island and we went off on a day hike from Twin Harbors, across the isthmus to Catalina Harbor and then straight up a dusty road for 1.5 mile.  There were no switchbacks nor shade.  It was a brutal introduction to the southern CA sun, but once we made it to the top, we enjoyed another couple of hours of meandering up on the coastline, with incredible views.

The Harbor Patrol staff at Twin Harbors were super accommodating and friendly.  What a job to keep all these boaters safe and happy.  We were also very appreciative of the free Internet that Rob tapped into.   Thank you USC (Marine Science Center)!

Posted by shindigsailing at 9:32 AM