We were reminded of the remoteness of the Channel Islands in CA this week when we visited Isla Isabel,  an isolated volcanic island 90 nm southwest of Mazatlan.  Now 90 nm seems a somewhat short distance,  although it is likely the longest range we’d attempt to accomplish in one day.  (And a day = 24 hour). Isla Isabel is a somewhat natural path for sailors migrating from Mazatlan down south towards Banderas Bay (Puerto Vallarto).  We left at 2AM in the morning from an anchorage in Mazatlan, after enjoying heartily the local garlic shrimp pizza with our friend Michael from Patanjali, and neighboring boat, Sojourn.  The wind gods were sleeping that day, so we had to motor most of the way.  The skies were clear, we were visited by our dolphin friends, occasional sea birds and several fishing pangas who were concerned that we might snag one of their long line nets, which we did..... three times.


As we approached the island the following afternoon, we could see hundreds of birds swirling high up in the thermals.  A few masts from sailboats started peeking up from one of the anchorages.  We had arrived.


The next day was full of fun.  We met friends ashore in our dinghys and hiked through the brush on trails, being careful not to disturb the nesting seabirds on the ground and above our heads. Nancy was in search of the blue-footed booby, which we sighted soon.  The frigates were plentiful and when excited, would puff up their throats displaying a bright red bulbous display, kind of like a turkey.  We found the local fish camp, and met two on-site college biologist grads from the University of Guadalajera.  They were very gracious in answering many of our random questions, and joined us further on the hike to a lookup ridge.


After the hiking, three of us went off in the dinghy to snorkel.  We found hundreds of colorful Pacific Ocean fish, exploring coral cliffs and caves.  Nancy saw Moorish Idols, Raccoon butterlies and brightly colored wrasses.
Later that night we hosted a sunset Shindig for 7 and had Popstar Mai-Tai’s, grilled shrimp and steak, coleslaw, brown rice and norwegian pea salad.  Dessert was Trader Joe’s Jo Jo’s cookies accompanied by an impressive photo show of our combined photos of the trip to date.  We all joked, that like proud parents, no one else would be patient enough to sit through such as “slide show”. 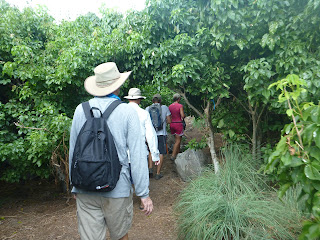 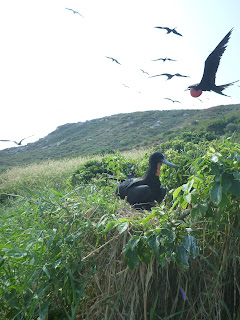 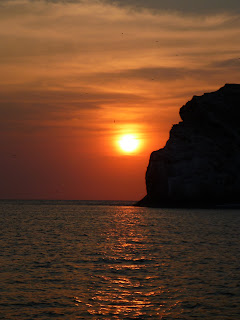 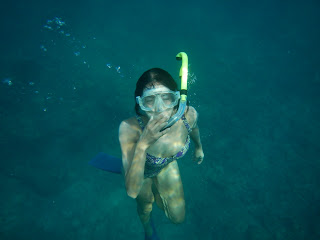 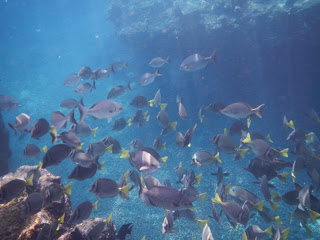 Posted by shindigsailing at 7:04 AM