Banderas Bay is home to several nesting areas for sea turtles. Four protected species nest along the coast of Nayarit, including leatherback turtles and Olive Ridley turtles, whose nesting season continues from June to November. Hatchings often take place right outside the resorts on Banderas Bay.  Here are photos of a recent release we participated in.  Tomorrow, I will attend a fund raiser at a local hotel for the volunteer program ; there is supposed to be tortuga/turtle inspired art work which will be fun to admire.
The Turtle release program in Banderas Bay is sponsored by a local volunteer organization to supplement the government preserve.  After the mother turtle lays her eggs, volunteers carefully collect them from their nests.  The eggs are replanted in a large wire cage, with dates and numbers. About 45-60 days later, they hatch.  And eager volunteers and tourists help the baby turtles make it to the water.

At a sunset release time, we saw a very exciting display, with all ages of participants, including grandfathers, carefully cupping their one baby turtle in their hands.  We cheered for each released baby turtle; Volunteers discretely helped a few turn in the right direction before the waves could take them away. Not all were protected. Soon the circling frigates and pelicans started diving for the baby turtles that had just made it into the water. The air was filled with dismayed shouts from the crowd and banging of cans, along with waving sticks and scarves.... anything to shoo the birds away.  A few turtles were lost.

We're sure that raising the local and tourist awareness of this fragile lifecycle, especially as eggs and baby turtles, is helping the population. When we were sailing up the coast last month, we saw many large turtles, lying in water, right around our sailboat perimeter. They would pick up their head, look at us, and then dive underneath. 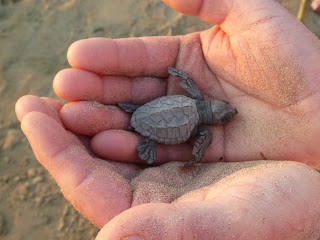 
This is the cutest little fellow you've ever seen!

Posted by shindigsailing at 6:54 AM