The humming was constant, a musical note, wavering slightly, but clear, joyful, and certainly representing happiness.
Wow, our friend Brian must really be enjoying this underwater snorkeling adventure!  (Rob doesn't hum)
Then we realized the sound were of whales. Very cool.  No matter how many tapes of whale music one may have heard over the years, hearing whales in person underwater is the real thing. Later we speculated on how much further sound travels under water than above (100x), as well as how much faster underwater it travels (4.5x).


We had hired a panga driver to pick us up that morning from Punta de Mita and buzz us out to the nearby the Marietas.  Our friends from Autumn Wind, Brian and Elizabeth, joined us.  These national park  islands are known for their wildlife, another “Galapagos of Mexico”, with pelicans, terns, boobies on the volcanic rocks;  green coral and volcanic rock teeming underwater with all sizes and colors of tropical fish.
We were earlier than any other panga boat of tourists, and swam through the opening of a deep cave that deposited us onto our own lagoon and beach.  After snorkeling along the outside perimeter, we made another stop was a beach drop off, with our morning snacks.  There we discovered several other beautiful hidden coves, small beaches, with impressive surge and tumbling rocks and wind.  The winds were picking up, and the panga driver encouraged one more stop, to get just the right photo.  There we perched on the panga bow, a rocky arch framing us in the background.  The photo is good, but a mirror would be better, to show the driver maneuvering the powerful panga through the surge, camera in one hand, and saying “smile” with his silver glistening silver capped teeth.
It was a wild ride back to Punta de Mita’s anchorage. Winds were 15-20 knots, lots of swell and the panga riding the waves. We had chosen right to go via panga. While private boats are allowed there, we wouldn’t have found the secret spots, nor felt comfortable anchoring our sailboats while we explored. 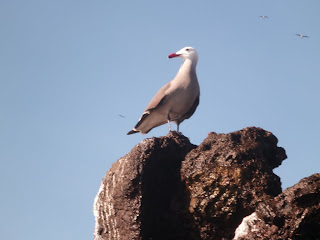 Posted by shindigsailing at 6:32 AM