In February of this year (2013) I replaced my Raymarine radar and plotter.

The older 24 mile unit had failed and new radar units from Raymarine were not compatible with my RL80C plotter.

I replaced the RL80C with the Raymarine E125 unit and the radar with the HD Color 24 inch closed array unit.

Now that we have had a few months to play with it and do several overnight passages with the radar I thought I'd share pluses and minuses of the installation and usability of the set up.

At a high level the plotter exceeded expectations and the radar is just OK.

In the Whiskey Tango Foxtrot category.

Here is a screenshot of a ship passing on our port side  at 1.6 miles during the Mazatlan to Baja passage.
Note the AIS arrow is pointed the wrong way.  The ship must have a problem with the heading data they are sending out.  The SOG was correct but the Heading was 180 degrees off.  To us it looked like the ship was passing us in reverse! 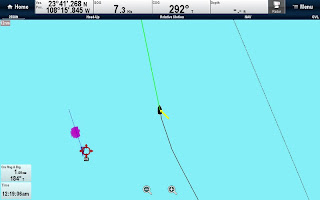 Posted by shindigsailing at 7:00 AM