It is hard to believe that we sailed under the Golden Gate 200 days ago.  It seems like yesterday.

The cruising community mantra is that "Plans are made in the sand.... - at low tide."   Rob refers to Plans being "flexible". I guess it's time for a new Plan.

Before we left the Bay Area we thought we might join the spring Puddle Jump to the South Pacific.  The Puddle Jump is a loosely formed rally that departs from several places on the west coast of North and Central America around the March/April time.

There have been a series of seminars and gatherings in La Cruz and Paradise Village to support all the boats heading West.  Many of our sailing friends are now on their way, heading towards the South Pacific.

Many months ago Nancy and I decided not to do the Puddle Jump this year.  Why rush out of Mexico?  We are having such a great time here and we haven't even starting to explore the Sea of Cortez.

Our new plan, in the sand is:

After some friends commented that our original photo "doesn't look anything like you", we've updated to this photo, taken while sailing Shindig on Banderas Bay. 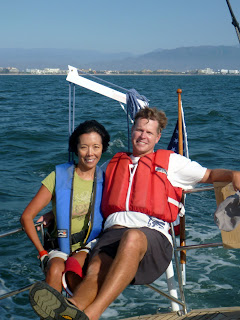 Posted by shindigsailing at 6:22 AM