From the Mainland to Baja

Hola! Just catchin' up on the blog/Internet after several weeks on the Baja side of Mexico.  We'll be updating the blog over the next week or so...hope you're still enjoying the read...
-----
We had a good passage from Mazatlan over to the Sea of Cortez.  About 38 hours in all, got to sail about 5 hours of that.  It was nice to only have one overnight.  We made landfall at Muertos, just South of La Paz.


Non-sailing friends sometimes wonder about our watch schedules.  I had recently asked some friends on what they do, as a couple, with overnights, as many were making the same passage.  I decided to stay up as late as I could (1AM) and let Rob sleep.  Then he got up at 1230AM anyway, helped me out with a neighboring ferry boat or tanker that was coming a little closer, and I went to bed.  I was up before 5AM and continued to be on watch until later in the morning.  We felt pretty good when we arrived in Muertos Bay, around 2-3PM.   We chatted with some neighboring sailors, and then decided to stay an extra day to enjoy the beautiful beach, and see who else would show up.  The sailboats that arrived included a big group of affectionately called “kid boats”, Northern Passage, Star Passage, Sweet Dreams, Resilience.  We spent the next full day on the beach, arriving by Stand up paddle boards, with beach toys, sunscreen and little money. It was refreshing having some hang-out time with the ladies, flying kites, watching the young boys skim board in the waves and girls prance on the beach.  The day ended with a great exploration to the Gran Sueno resort, where we were greeted from the grand staircase with a “Welcome Home”.  Sandy sailors, pool tables, a massive model train collection filling the upper lodge, quiet fountains, good food and beautiful views.
An interesting side note.  Ensenada de los Muertos or “Bay of the dead” is trying to rename themselves Ensenada de los Suenos, Bay of Dreams.   I guess the developers in the area are looking to solve a PR problem for visitors. (Rob)


The next morning we were up early, determined to sail out around the point, and up the Cerralvo Channel, which can get very windy.  The route took us past remote beaches with little developments.  We noted the location of Las Ventanas and Los Brailles, which are supposed to be meccas for windsurfing and kitesurfing.  The season starts there in November, so it is penciled in on our calendar for next fall.  Next stop was straight into Bonanza Bay, a huge horseshoe white beach where two other sailboats were quietly anchored.  We had a beautiful afternoon of exploring the long, shell strewn beach, accessed via our boards.  The sand was made up of little shells, each one was tumbled smooth from the waves.  We could see and hear on the radio other sailboats as they also made it up the channel and turned west and then south towards La Paz.  Our first plan was to go directly into the islands north of Laz to wait out the approaching Northerly winds, but we decided to head into the town of La Paz.  As Nancy described, “there is a galley emergency, we are down to the last tomato and onion”!   Rob happily obliged as he has heard many tales of the local watering hole named “The Shack”, which supposedly serves up vertically challenged hamburgers to enthusiastic patrons. 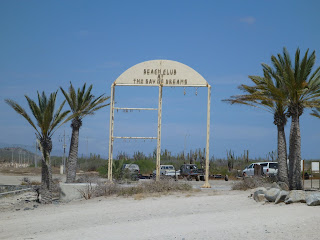 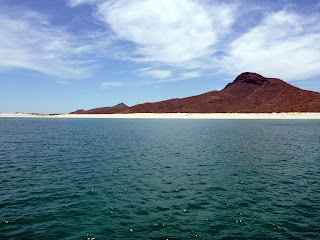 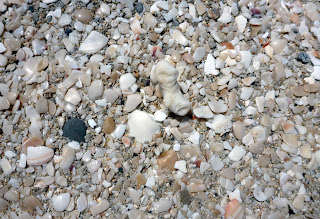 A beach of sand and shells 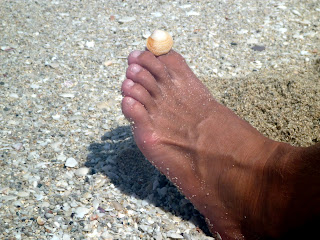 Posted by shindigsailing at 4:57 PM