We decided to race Shindig in the Banderas Bay Regatta again this year.  It was a great event, as it brought more friends aboard, including Mark and Patty Thompson, and Dan Adamis from the San Francisco area, and Max Shaw, captain from Fluenta, a fellow Baja Ha Ha alumni from our 2012 rally.   Dan was a repeat from our Baja Ha Ha crew as well as one of the crew members from last year's race.


With a total of 6 aboard, compared to 4 last year, we had some more specific roles, as well as the opportunity to improve our crew skills and wardrobe.  First decision was to debut some Shindig shirts to keep the morale high.

For the decorated boat parade, we decided it would be best to play off the theme "Living in Paradise" with something that differentiated us on board.  Patty and Mark gamely agreed to dress up as a sophisticated couple, and be served oysters and champagne by their adoring crew.  Nancy played live piano on her keyboard on the bow, while Captain Rob deftly maneuvered us through the parade route. 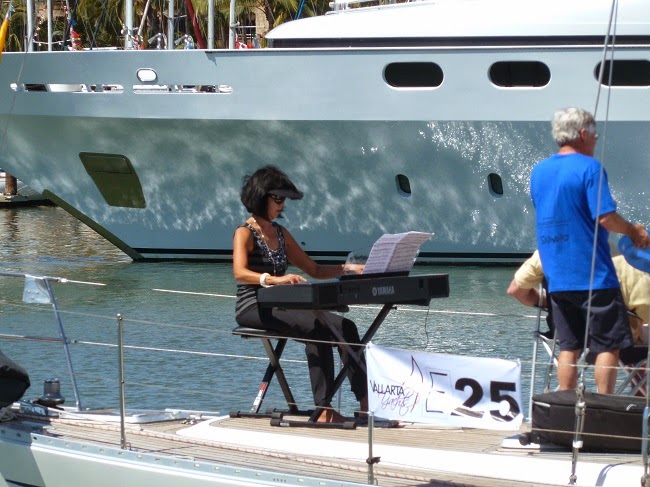 Once the parade was finished, we all scrambled to put away the keyboard, costumes, flags and merriment, and get down to some serious racing!

Winds were brisk on day one and two and Shindig enjoyed hull speed conditions.  Day three was a bit on the light side for our 41,0000 pounds but still made it around the course well,  Shindig won first place in our cruising class of 8 boats..   We finished each night with a post race debrief in the cockpit, and get together dinners at the Vallarta Yacht Club or out.  The final Awards dinner was held out on the sandy beach past the Paradise resort.  It was a week to remember, and we enjoyed every minute of it.


Posted by shindigsailing at 3:19 PM