Last week John (AKA Swagman) and I left San Diego with a full load of goodies headed for La Paz.  Both of us had solar panels, Costco treats and a bunch of misc. boat parts to provision our boats for the next season in Mexico.


We took three days to make the 800+ mile trek.  This allowed us to avoid driving at night and to enjoy the beautiful scenery along the way.  The highway can be very narrow, with no shoulders.  Also, with grazing cattle nearby, it is common to encounter livestock on the road.  Better during the daytime than night.

Day one started with the border crossing at Tijuana.  We paid a little duty for the stuff we brought and also got our 180 day tourist visas.  The border crossing at TJ appears very new.  It was not busy at all and we got through the inspection and paper work in about 30 minutes.  I made my last cellphone call on the iPhone to Nancy, and then put it in dormant mode.  We'll be using our little Mexican cellphone now.

Once on the toll roads toward Ensenada we had a little hiccup.  At one of the toll stops the attendant told us that we had lost some clothes from our truck.  John had packed three boxes of clothing for donations in La Paz.  They were stacked on the top in the Dole pineapple boxes.  Despite the tie downs, they had gotten loose.  ......  So we made a early donation.

In Ensenada we made two important stops.  First was to get our Mexican phones working and the second was at one of John's favorite ceviche restaurant/cart. 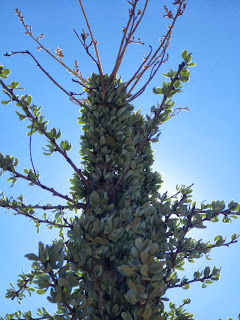 We stayed the first night in El Rosario at the Baja Cactus.  This place was great.  Clean rooms at a great value($27/night).  They have a fairly secure courtyard and the Pemex is just next door. Internet, too.

Day two was a long one.  We got under way in the fog and made it to Mulege by 6:00 that evening.
Hotel Serenidad welcomed us with tasty burgers.  Compared to Baja Cactus, the $70 room rate for old but clean rooms was an adjustment.

During our boating season in the Sea of Cortez, Shindig had made it as far north as Mulege.  So I was starting to be in familiar territory......

On day three we drove south into the Bahia Concepcion.  This is a beautiful bay that we enjoyed so much in May.  South of Concepcion we stopped in Loreto for breakfast and treats at Ette's Pie Shoppe.  Yumm.

The trip down Baja was long but doing over three days was very manageable.  John was good company and we are still talking to each other after so many days in a truck together. We noted a Cabo San Lucas bound caravan along the way, one RV and two trucks.  They also stopped at the same rest areas as we, and had done the trip many times.

Most of the highway is a two lane road limited to 80 kilometers per hour.  That speed limit seems to be just a suggestion though.  Most were traveling at 120 kph or more.

There were more than a dozen areas where road workers were repairing the highway.  The areas were never more than a mile, so these added dirt road adventures were no problem.

Security check points along the way were well staffed with military.  They were very friendly and usually asked where we were coming from and where we were going.  We were never searched.
At one of the stops we had a good laugh when the guard, who looked about 18 years old, told us that only Mexicans could pass after 5:00.  His stern face quickly turned into a big smile as he waved us through.

It is great to be back in La Paz.  The truck is unloaded, Nancy has arrived, and the boat projects begin!

Posted by shindigsailing at 9:15 AM