Shindig carries 13 batteries on board and 8 of them make up the 24 volt house or "domestic" bank.
I had been noticing that this bank was not holding up well during weekend trips and that two batteries in particular were always 0.3 to 0.7 volts lower than the rest in the bank.

I conducted a 20 hour at 5% of the battery capacity test and discovered that indeed 2 batteries were bad and 3 were marginal.

I only ran the test for 5 hours and the data clearly told a sad story. 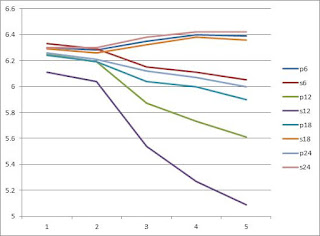 This is really a bummer because the previous owner had replaced the batteries 3 years ago and I would expect much more from AGMs.  I diagnosed that the root cause is the Link 2000 charge controller.  The controller has been floating the battery voltage too high (28.3v).   So all that time at the dock, plugged into shore power, the Xantrex charger had been slowly killing the batteries.

Unfortunately there is no calibration procedure for the older Link 2000 units.

Rather than replace the Link 2000 I decided to put in a good high output charger that can be programmed.  I bought the Mastervolt 100Amp/24V model and I'm very pleased with it so far.  I can set the bulk, absorption and float voltage parameters with 0.05volt precision.  In addition to being able to properly maintain all my batteries with the charger I will also reduce the amount of time I have to run the generator for battery charging by 50%.  The unit can pump 100 amps into the domestic bank during bulk charging. 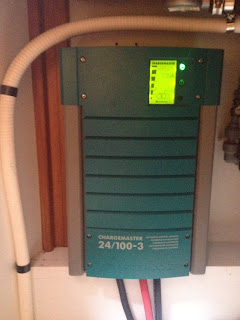 So out go come the existing batteries..... All 8 of them. 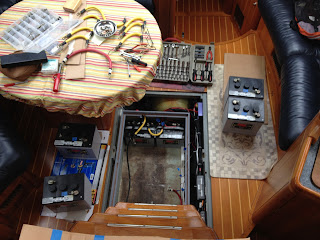 ....And in with the new Lifeline AGM 6V golf cart batteries.  Each one weighs in at 68lbs and it was a slow and methodical process to muscle them into place.  I bought these from American Battery in Hayward, CA.  Jim Ramos was really good to work with.  He gave me a fair "boat show" price and free delivery to the boat.  His driver was on time and hauled away the old batteries too.   I can't ask for more than that. 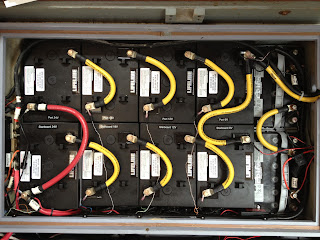 The Lifeline batteries were an exact fit for the existing MK batteries.

A preliminary load test shows these new batteries are rock solid and and the new charger is floating them perfectly at 26.6 volts or 6.65 volts/battery.

Posted by shindigsailing at 12:47 PM